What to Expect During 2019 Holiday Season 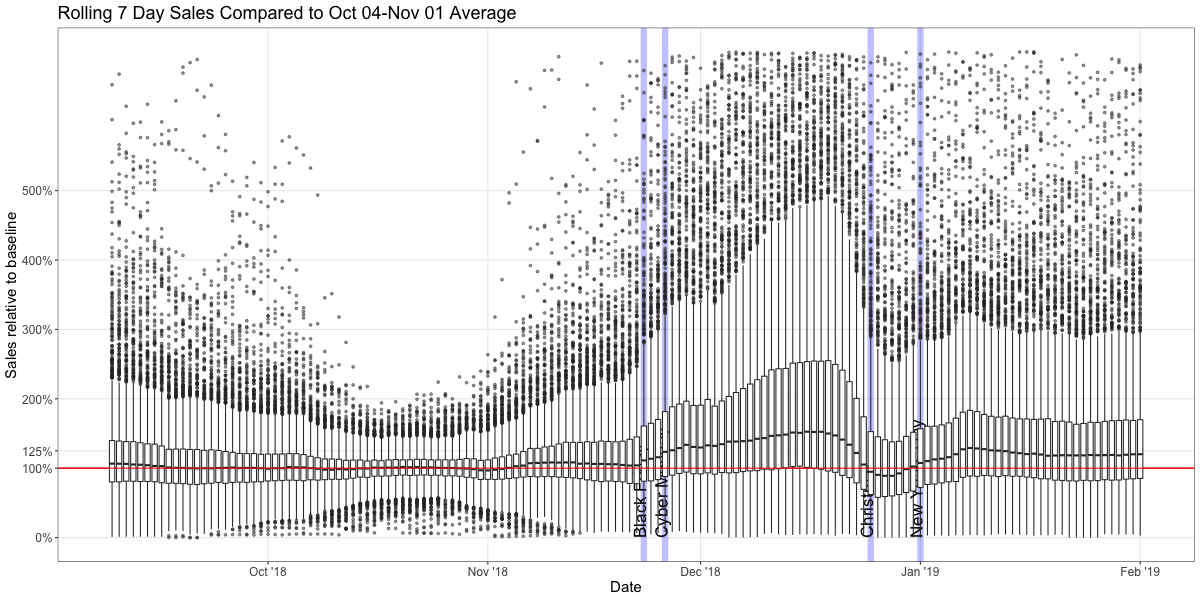 Most of the year Amazon advertising performance is fairly stable for most accounts. There are a few days that stand out, like Prime Day, but nothing compares to the wild ride of November and December.

We took a look at the average performance during this period so account managers can have some context. This is especially useful if you don’t have last year’s data for your account readily available. If you’re a long time prestozon customer, we encourage you to take a look at last year’s data when you’re preparing for this Q4!

Let’s start by looking at some metrics independently. Most of these are normalized to a baseline period. What that means is that we took each account’s average value over the four week period October 4-November 1 and compared every day for that account to that value. That makes it possible to compare different sized accounts without the largest accounts dominating. It also allows us to compare accounts that are in different niches, such as if one is running a $0.50 average CPC and one is running $5.00 average CPC.

All data presented is anonymized and aggregated among several thousand accounts.

The two primary metrics everyone is interested in during the holiday season are sales an ACoS. These plots show the average shift for the accounts in the analysis, split between Europe and North America.

That 25% lift in click volume comes with a 25% lift in spend. Make sure that you’re keeping on top of your budgets if you want to return to your October spend levels. It’s important to realize that the click volume is there if you want it, though. If your January ACoS levels out to a value you’re happy with, we recommend to keep your budgets elevated to continue driving clicks and sales.

When we look at them all together on one plot it’s easy to see different phases of the season.

And as a bonus, here’s a more advanced plot (called a box plot) that shows the range of sales shifts.

What we see here:

Everything for your business on Amazon.

Find out more about our products by signing up or speaking with one of our
Customer Success representatives today. With us in your corner, you can enjoy
more sales and increased engagement from your Amazon business.