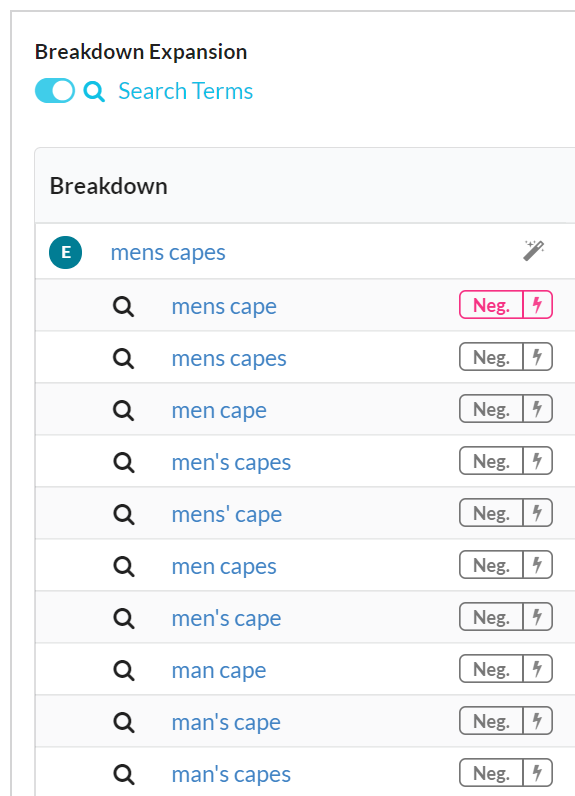 When processing your keyword rules, Prestozon now does two checks when creating a suggestion for a keyword:

Let’s dive into the details to understand why this is so important.

How does Amazon treat exact match?

“Exact” is a bit misleading when it comes to the exact match type. Amazon will match close variations where the customer search intent seems to be the same. The most commonly known variations are plurals. If we have an exact match keyword “mens cape”, Amazon will also match against the search terms “men cape” and “mens capes”. What’s not as commonly known is that they will match against “mans cape”, “men’s cape”, and “man cape’s”. Customers search on strange things sometimes so we even see “for men capes”, “a mans cape”, “men+cape”, etc.

The most we’ve seen is nearly 200 unique search terms for one exact match keyword!

At first blush this doesn’t seem like a big deal. It is clear that the customer is looking for the same thing so you’re happy to show up for all of those without the hard work of figuring out each of the precise text strings on your own. But if you are familiar with how important search term isolation then is you’ll understand how this can be a huge problem.

It may take you a while to notice that “mens capes” is now getting all of the impressions for these search terms. Once you’ve gathered enough data to realize this, you’ll come to the same conclusion that the bid should be reduced to $0.50. That’s wasted money, because you already knew that!

Prestozon’s new coverage checks prevent this from happening as new exact match keywords won’t be created if the term is already covered by an existing one.

Ok, so we’ve established that it is critical to make sure you have minimum (or zero) overlap between keywords for the search terms you want to control performance over. It’s also important to understand how Amazon treats exact matches from a negative perspective.

The new negative exact coverage check goes through your search term performance and checks to make sure Amazon won’t kill exposure to another search term that is converting.

Coverage checks in Prestozon’s keyword rules handle this whole problem. It’s tricky to do on your own because Amazon doesn’t provide explicit rules for what is treated as the same, so you’re required to use your search term report to understand what Amazon treats as equivalent. Prestozon’s advanced data capabilities handle all of this automatically

Exact match keywords are critical to scaling performance in Amazon ads. Making sure you understand how they work is critical to controlling this performance. As always, Prestozon is here to remove the tedious tasks from your to do list.