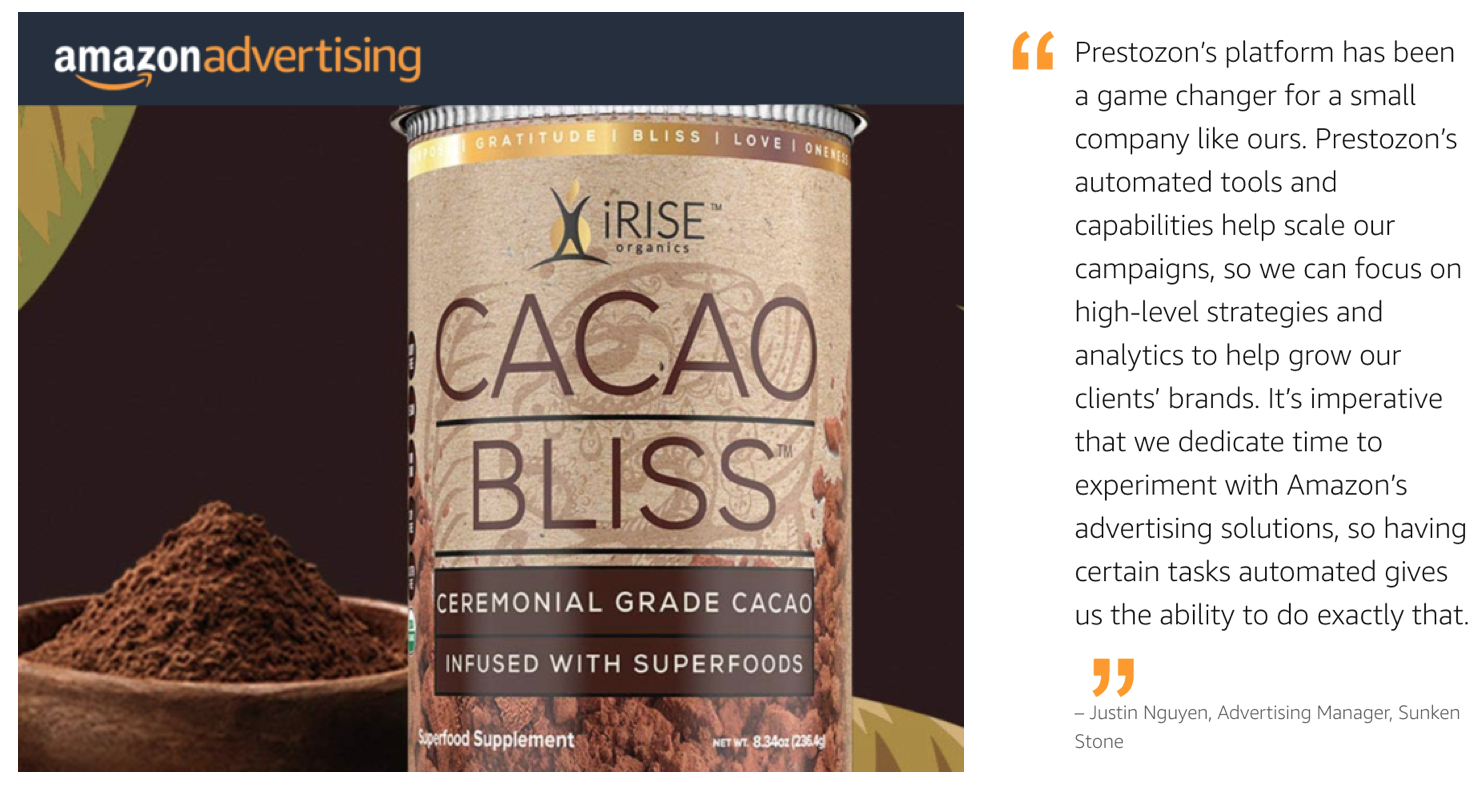 Headquartered in San Diego, Sunken Stone is a performance-based agency that offers a broad list of services including content optimization, listing monitoring, and campaign management. In 2018, iRise Organics – a raw cacao powder, nutrition-based company – turned to Sunken Stone to manage its Amazon Advertising efforts and help drive brand visibility beyond its own direct-to-consumer website. “Having only been selling through our website, we knew we were missing out on opportunities through secondary channels such as Amazon. Working with Sunken Stone provided us with peace of mind knowing a team of experts were helping us grow our brand,” said Kyle Kostechka, Marketing Director, iRise Organics.

To efficiently deliver results on behalf of its client, Sunken Stone joined forces with Prestozon, a software provider that leverages the Amazon Advertising API to offer campaign automation, management, and optimization. Prestozon’s software can help advertisers and agencies quickly set up, restructure, and scale their advertising campaigns.

Prestozon’s platform has been a game changer for a small company like ours. Prestozon’s automated tools and capabilities help scale our campaigns, so we can focus on high-level strategies and analytics to help grow our clients’ brands. It’s imperative that we dedicate time to experiment with Amazon’s advertising solutions, so having certain tasks automated gives us the ability to do exactly that.

With the goal of driving brand awareness on Amazon, Sunken Stone began by developing high-quality imagery and creating copy for iRise Organics product detail pages. Next, the team performed extensive keyword research to understand which branded and non-branded keywords were most relevant to the brand’s product. Sunken Stone even made a point to include brand misspellings during campaign setup, knowing the word ‘cacao’ was often misspelled by customers.

Sunken Stone then used Prestozon’s 1-click campaign setup to deploy five Sponsored Products campaigns in order to help maximize and expand the brand’s reach. With an automated approach to campaign management, Sunken Stone efficiently set up campaigns instead of having to create them manually, one by one. Throughout the duration of each campaign, Prestozon’s platform automatically promoted and suggested the removal of certain keywords based on target conversion rates and advertising cost of sales (ACOS) benchmarks established by the agency.

Following the initial success of the Sponsored Products campaigns, the agency also launched Sponsored Brands campaigns and created a Store in June 2019 as a way to further promote iRise Organics brand and help maximize visibility of its product. Looking at keyword performance in the Sponsored Products campaigns, Sunken Stone was able to use these learnings to target relevant search terms from the start, driving conversions and increasing sales. The agency also conducted tests to grow the reach of their Sponsored Brands campaigns, measuring performance of exact match keywords to identify which should be moved to broad match. The team optimized these campaigns on a biweekly basis to ensure the changes that were made had enough time to create an impact.

With the help of Prestozon’s automation tools, Sunken Stone was able to reach new customers and deliver over 4.5 million impressions with a 12% ACOS for its client. Since launching in September 2018 as a new brand on Amazon, iRise Organics’ sales increased by 7x per month with advertising contributing over one third of the monthly sales, on average.

Satisfied with the results, the brand increased its monthly spend on Sponsored Products by 6x since initially launching on Amazon. Furthermore, as a result of launching the Sponsored Brands campaigns alongside its Store, iRise Organics has seen over 1,000 orders from new customers, based on new-to-brand metrics.

Sunken Stone shared a few recommendations for other advertisers to consider when running sponsored ads campaigns:

0/5 (0 Reviews)
Dierk Demers Dierk Demers is the Head of Ad Strategy and Partner Support at Prestozon. He has been designing unique e-commerce strategies across multiple industries for almost a decade. At Prestozon, he translates his diverse experience into targeted Amazon PPC insights.