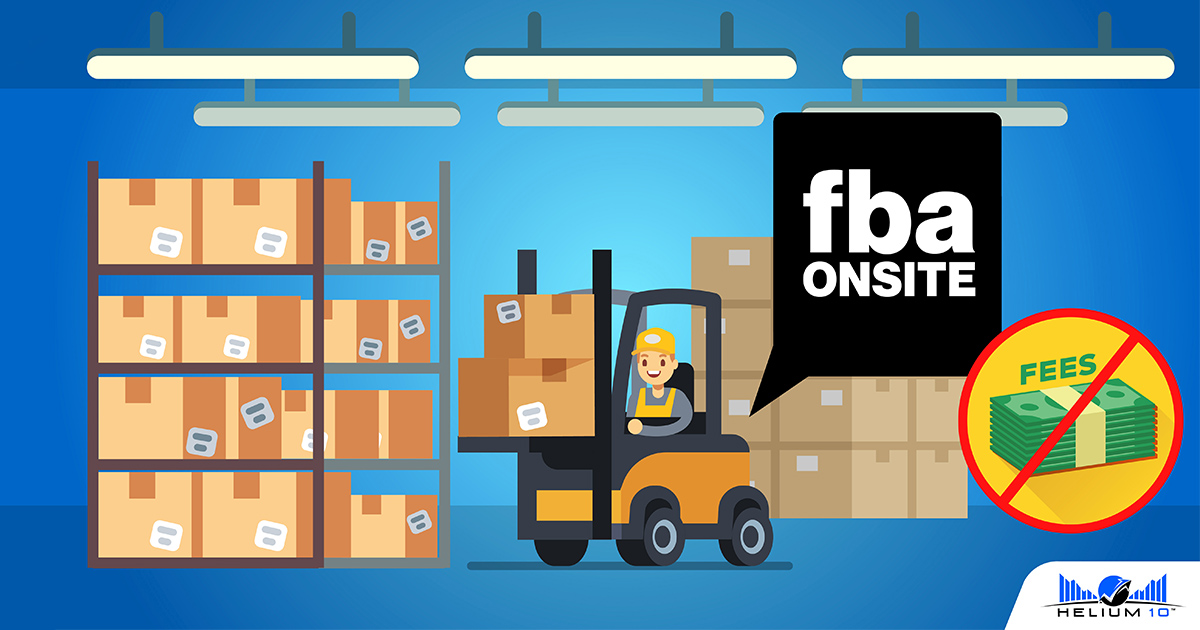 FBA Onsite is the latest incentive Amazon just rolled out for its current and future third-party sellers. The new Amazon software program looks to streamline shipping and delivery services for vendors while also benefitting Amazon in both the long and short run.

Amazon’s FBA Onsite will change the structure of FBA fulfillment fees to not include long-term storage, and will instead entrust storing inventory to third-party logistics companies or seller storage.

FBA Onsite is the latest incentive Amazon has rolled out for its current and future third-party sellers looking for a more affordable way to use Amazon FBA logistics without storage fees. The new Amazon program looks to streamline shipping and delivery services for vendors while also convincing more sellers to use Amazon services.

This new Amazon FBA program is a simplified hybrid version of SFP and FBA in an attempt to convert more sellers who prefer to have lower fulfillment costs. Onsite was created for sellers who have previously avoided either program due to hefty fees from Amazon’s fulfillment centers for FBA inventory long-term storage.

However, Amazon Onsite should not be confused with Multi-Channel Fulfillment, another progressive fulfillment program by Amazon. This program instead still stores FBA inventory in Amazon warehouses but will fulfill orders made outside of Amazon on other channels such as your own website. Storage fees still apply for inventory held at Amazon fulfillment centers.

Amazon claims that Onsite will save participants more time and money by limiting Amazon’s fulfillment services to just the pickup and delivery of a seller’s inventory.

In many ways, FBA Onsite is the bigger, better extension of Seller Flex, which Amazon tested last year during its brief west coast trial.

The key feature of FBA Onsite is the removal of using Amazon’s warehouses to store FBA products, which cuts shipment costs and shortens delivery time.

A significant difference between FBA Onsite and standard Amazon FBA is the division of customer service. Sellers can store their products at their own location(s) instead of fulfillment centers and remain in control of their inventory. Additionally, instead of fulfilling their product orders themselves, sellers let Amazon do the heavy-lifting—literally.

Under the new program, Amazon will pick up packages from a seller’s storage location and choose the best way to fulfill the orders. Amazon will opt to use its own logistical network to deliver the packages directly to customers or use third-party delivery services like UPS, FedEx, or other independent companies.

FBA Onsite appears to be faster, cheaper, and simpler than similar logistical models and offers enough perks to entice new and current sellers. Some of the perks of the program include:

Something sellers should be aware of with FBA Onsite is the loss of control related to shipping and delivery logistics. However, for sellers who’ve struggled with delivery issues, Amazon’s involvement lightens their load and provides a more direct line of responsibility should something go wrong during the delivery process. With the logistics handled, sellers can concentrate more time and energy on growing their businesses.

For Amazon, the FBA Onsite option means less overcrowded warehouses, more merchants with Prime-eligible products, and a chance to solidify its brand value through its reliable signature service. It should be noted though that if sellers want to sell internationally using FBA Onsite, they will have to have storage facilities of their own in the countries for which they want to have Prime-eligible service.

In December 2017, Amazon invited a select group of roughly 50 sellers to test out the new system. Details leaked by one vendor suggested a beta version with specifics that also included inventory set-up, free inventory receipt and removal, nationwide Prime services at a flat rate, Prime eligibility for Hazmat inventory, and same-day shipping.

Though its success is too early to tell, and Amazon remains tight-lipped in reports, seller forums are abuzz with curiosity and excitement for FBA Onsite. Both current FBA and non-FBA sellers want the same things: faster, cheaper, and more efficient alternatives.

If you are thinking about using Amazon Online for delivering products after sales, you should know what kind of FBA fees you may be facing. Helium 10 offers the Profitability Calculator tool in the Helium 10 Chrome extension, an FBA calculator that offers valuable information about individual ASINs to measure their profitability.

One of these metrics is the FBA fee calculator option that makes an accurate estimation of the FBA fees you will pay per unit for storage at Amazon fulfillment centers. You can also figure shipping fees based on product dimensions, the referral fee, and the possible ROI after fees and sales tax.

While the rest of us wait on Amazon’s own delivery fleets and drones to draw us into the game, Amazon third-party sellers can look forward to a more beneficial option that gives them the logistical advantages of Amazon FBA for less money.

Are you excited for FBA Onsite? Let us know down in the comments!

Follow Us
Helium 10
The Helium 10 Software Suite will allow you to gain an unfair advantage over your competitors as it was designed and battle-tested by Amazon's top sellers. So if you want more sales, more time, lower PPC costs, and if you want to discover hidden keywords your competitors don’t use then start using Helium 10 -- the same tools top Amazon sellers use on a daily basis.

#202 – An Update on Pakistan from Saqib Azhar, Creator of the World’s Largest Amazon Facebook Group
#200 – The Latest Amazon Product Launch Strategy – A “Maldives Honeymoon”
#206 – Two Best Friends 30X Their Income Selling on Amazon
Seller Spotlight: Former Flight Attendant Takes Off with Six Figures on Amazon in Her First Year
Everything You Need To Know About The New Amazon Virtual Product Bundle Tool
5 Reasons Why India-Based Sellers Should Start Selling on Amazon India
#199 – Amazon Selling Mindset, Using Influencers, 3D Rendering, and Other Tips from Down Under
10 Steps to Prepare Your Products for the Holiday Season
Es gab noch nie einen besseren Zeitpunkt, um bei Amazon zu verkaufen
#191 – Advice on How to Use Amazon Live by a 9 Figure Seller – Carlos Alvarez

One response to “FBA Onsite: Fulfillment by Amazon Without Storage Fees ”