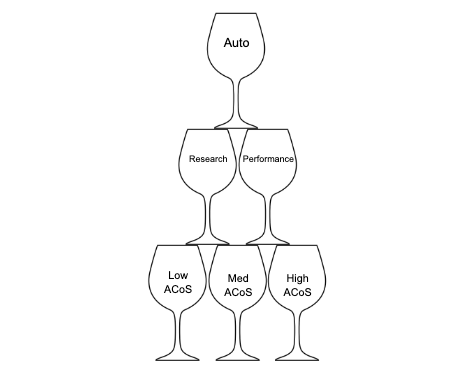 Prestozon has now added advanced options to customize your new keyword rule triggers.  In the past, new keyword rules were triggered by a single sale in any of the source ad groups.  Now, you have the ability to customize this trigger by setting the number of sales before the rule triggers and setting an ACoS threshold the search cannot exceed.  You can add new rules with these advanced options or add advanced options to your existing rules by clicking the eyeball next to a relevant campaign in the campaign manager:

When you can then click the pink positive button to add a new keyword rule or click the rule text or pen to edit an existing rule:

You’ll see the advanced options at the top of the rule edit window:

On the surface, these customizations allow for more flexible traditional promotion rules.  This is going to help our software cater to different account needs; most notably, accounts that have high sales volume where a single sale just isn’t enough to justify promoting a search term.

Once you explore deeper, these rule customization do much more than merely expanding the flexibility of the traditional rule structure.  Trigger customizations open a whole world of complex strategic options to account managers. A lot of our most experienced account managers already employ some of these strategies, but now they’ll be able to integrate them into the Prestozon ecosystem and, most importantly, automate them to save valuable time.

The original concept for these customized triggers was devised in order to supplement our current suggested rule structure.  Most managers familiar with Prestozon will be familiar with our suggested search term isolated structure:

With the default settings, any search term within the source ad groups (ad groups in the rule that have the check box checked in step 3) will be promoted when they get their first conversion.  So if there is a single sale on the search term “magic hat”, Prestozon will make a suggestion with 4 actions:

Prestozon will automatically check for duplicates and equivalences.  Where relevant, we will only create these entities if they, or an equivalent entity, do not already exist.

A single sale is great for many accounts, but some accounts are exceptionally high volume or very ACoS sensitive.  For those accounts, Prestozon’s original rule structure was still effective, but not a perfect fit. Now, Prestozon allows for the customization of these triggers:

These advanced options allow you to decide how many sales should occur before a rule triggers.  The rule aggregates the data across the source ad groups, so deciding your sources is an important choice in rule optimization, especially when using these advanced options.  Similarly, the Max ACoS threshold will only allow for the rule to trigger if a search term has an ACoS below that threshold for the data aggregated across the source ad groups.

Some account managers already make use of high volume campaigns devoted to search terms that drive the majority of their traffic.  In the past, managers had to pull these search terms manually and handle them outside the Prestozon software infrastructure. Now, you can create dedicated rules to routing high volume search terms into their own, isolated, campaigns:

High volume will be defined differently depending on the account.  This rule will be most effective in conjunction with the traditional Prestozon isolation rule.  Note that the negative in the traditional performance campaign will ensure these high volume search terms remain isolated.  Also note that in this example, I source from the auto and research campaign. This means that I will take the sales from those campaigns into account for the search term, some may choose to only use the performance campaign as a source.

Some account managers want to immediately promote out of the auto campaigns in order to gain control of search terms quickly, but they don’t immediately want to put untested search terms into their performance campaigns.  For account managers that want to setup a tiered promotion structure, they can use what I like to call Cascade Rules. This is a set of two or more rules that sequentially promote up into the next tier of specificity.

Note that the secondary cascade still sources from auto but requires 2 sales.  This covers the situation where a search term gets a sale from a broad match keyword, but it wasn’t the search term that originally received the first sale for promotion into the broad campaign.  This ensures all search terms will require at least two sales before they are promoted to the performance campaign.

While the structure above is a 3-tiered cascade rule, I can imagine some accounts might want 4 or even 5 tiers.  Consider an account where the tiers go: Auto > Broad > Phrase > Exact > Exact High Volume. It could even get more complicated than that.

Most account managers have to deal with the conflicting goals inherent in Amazon PPC: visibility and efficiency.  Often, optimizing for one leads to the deterioration of the other. For many accounts, different search terms can be categorised as efficiency terms or visibility terms and it can be helpful to manage these terms in separate campaigns.  Prestozon’s advanced options will allow you to create rules to effectively separate these terms by using a modified cascade structure:

This is an example of a three tier ACoS ruleset, but you could make as many (or as few) tiers as you would like.  This would essentially partition by each ACoS level based on your rule parameters. Note that I set the secondary rules to a 3 sale threshold in order to make sure the ACoS was fairly settled before a promotion decision was made.  ACoS for search terms does have the potential to change, so it will be important keep an eye on the ACoS partitioned campaigns to ensure the search terms are maintaining their ACoS

Prestozon has long believed in the idea of Search Term Isolation and the importance of a search term centric approach to managing Amazon PPC.  While we’ll probably never stop touting Search Term Isolation because we believe it’s the best way to effectively manage your only direct touch points with your customers, we also want to stress that Prestozon is a tool, not a strategy in and of itself.  Prestozon’s rules engine is flexible and within its framework, any number of effective strategies can be developed. I want to highlight a few rule structures that I probably wouldn’t pitch to anyone directly, but that fully work within our rules engine:

Some accounts prefer full coverage with multiple keywords firing on every search term.  Either within the same ad group, or in multiple ad groups (as in the example above), you can easily set up full overlap keyword structures.

Users often have strong feelings regarding Broad vs Phrase, but some account managers prefer to use both.  Above is an example of a partially isolated standard rule, but this could also be turned into a cascade structure using multiple rules! Note that the Broad and Phrase ad groups are in separate campaigns.

Auto to Exact, no research:

Amazon’s suggested baseline structure is just one auto and one manual campaign.  Here is a pared down isolation structure.

In certain situations, Phrase match will be superior to Exact match as performance keywords.  You can create rules using Phrase Match Keywords as your performance campaign if you so choose.

Putting it all Together

While all these individual strategies can be used in isolation, they can also be used in conjunction.  Let’s look at a few holistic strategies that some accounts may benefit from:

Some accounts find themselves having to balance their bid strategy between two disparate sets of search terms.  Search terms that drive the efficiency of their advertising, and search terms that run inefficiently, but drive significant visibility.  In the past, an account manager would have to separate these out manually, but now, an account manager could set up a traditional promotion flow to a low volume performance campaign and then two individual pipelines. One high sale, low ACoS rule to isolate the efficient search terms; and one high sale, no ACoS restriction rule to isolate the visibility search terms.  From there, you can set your ACoS targets at different points for these two campaigns and more effectively manage bid on each; and now, all of this is completely automatable.

If you’re an agency, you’ve definitely experienced this.  You inherit an account that is a complete mess; but your client wants results, “Now.”  These advanced strategies can be applied to get easy wins and immediately show value to the customer with minimal time investment.  You could create a rule with an aggressive ACoS threshold funneling into a high efficiency campaign (which will likely end up mostly containing branded terms) in order to isolate those terms.  You can then funnel high volume terms from each vertical in the account into their own campaign, giving you the ability to immediately identify and optimize the most important search terms for the new account.  An experienced Prestozon user can get rules up and running in just a few minutes, and remember that the rules will go through the past 90 days of data. This would give you incredible insight into the account history and help you shape your long term strategy.

All of these promotion structures and many more are fully supported so long as you create them with the sales triggers in mind.  We at Prestozon live and breathe Amazon PPC Advertising strategy, but you live and breathe your account. Ultimately, our goal is to provide you with automation software powerful enough to enact any strategy that you can dream up! Be sure to also check out Helium 10’s Amazon PPC tool to help with your Amazon advertising strategy!

Dierk Demers Dierk Demers is the Head of Ad Strategy and Partner Support at Prestozon. He has been designing unique e-commerce strategies across multiple industries for almost a decade. At Prestozon, he translates his diverse experience into targeted Amazon PPC insights.